The Church of England in Your Community

Robert Hunt was vicar of Heathfield from 1602-1606. He lived in the village (probably at Manor Farm, whose earlier name was Old Parsonage farm) with his wife and family during those years. He was charged in the Archdeacon of Lewes' Consistory court in 1606 with dereliction of duty and of immorality with Thomasina Plumer (a servant). He was acquitted of both charges. In his Will, written in November 1606, he leaves his estate to his wife, but not if she marries the son of John Taylor, a Heathfield farmer. 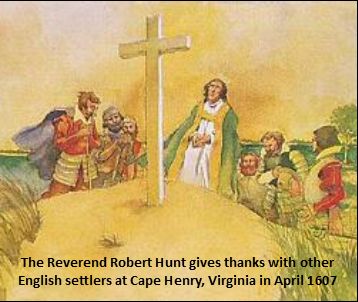 He is invited by Richard Hakluyt and the then Archbishop of Canterbury to travel to Virginia as Chaplain with the expedition sent out by the Virginia company in 1606 to seek for riches, gold, precious stones like the Spaniards were discovering in the South. It is recorded that he conducted the first Anglican service in North America, under a sail awning in May 1607.

They eventually settled in an estuary which they called Jamestown in honour of the recently crowned King of England. Their reception by the local Indians was generally hostile. It is unlikely that Hunt was a member of the exploration party, captured by Indians, when Pocohontas threw herself over John Smith to save him from decapitation.


Robert Hunt  remained alive throughout the summer and winter of 1607 but died of illness in spring 1608, having lost all his belongings in a fire just prior to his death. Diaries written at the time record his passing with sadness and describe him as a godly, conscientious man. The news reached England in the summer of 1608 and his wife shortly remarried, but not to the son of John Taylor!

Listen to the Revd. David Guest talking about 'Reverend Robert Hunt' in a sermon on Trinity Sunday in 2014.